Keeping Up with ASO Updates Impacting App Store Optimization in 2019

Every year app marketing professionals eagerly await major iOS and Android operating system updates with nervous excitement. In order to achieve good optimization results, marketers have to roll with the changes brought by OS updates and figure out how changes will impact App Store Optimization.

Google’s new OS Android 10 (Q) is casting shadows with its current third beta. And so is iOS 13, which will be presented at Apple’s WWDC on June 3. With these impending changes in mind, we want to share some operating system (and hardware) updates with you that we think will impact app marketers’ ASO practices in 2019.

The Google Play store has had issues with disparity between app icon shapes. With that in mind, Google recently introduced standardized app icons on the Google developer blog in order to improve the overall store experience.

Every update of existing icons, and every new icon, must conform to the so-called squircle shapes by June 24, 2019. In addition, transparent backgrounds are no longer allowed.

The standardization forces app marketing teams to strive towards visual conformity on their store product page. Furthermore, it fits into Google’s overall strategy of continuing to bring its Material Design update to nearly all of its apps. Various blogs such as TECHTIMES or Android Authority have pointed out the continued design rollout.

Are Apple and Google going to ease video restrictions?

Given its impact on conversions, visual metadata such as app preview (App Store) and app promo videos (Google Play) will continue gaining relevance. App Store video guidelines have always been rather strict with what marketers can actually show in the video.

And yet we recently discovered that preview videos in the App Store of Deutsche Telekom’s Magenta TV app and the travel app Kiwi deviate from the strict rule of refraining from showing any devices but strictly in-app content. This makes us wonder whether Apple might ease its video restrictions in the future. 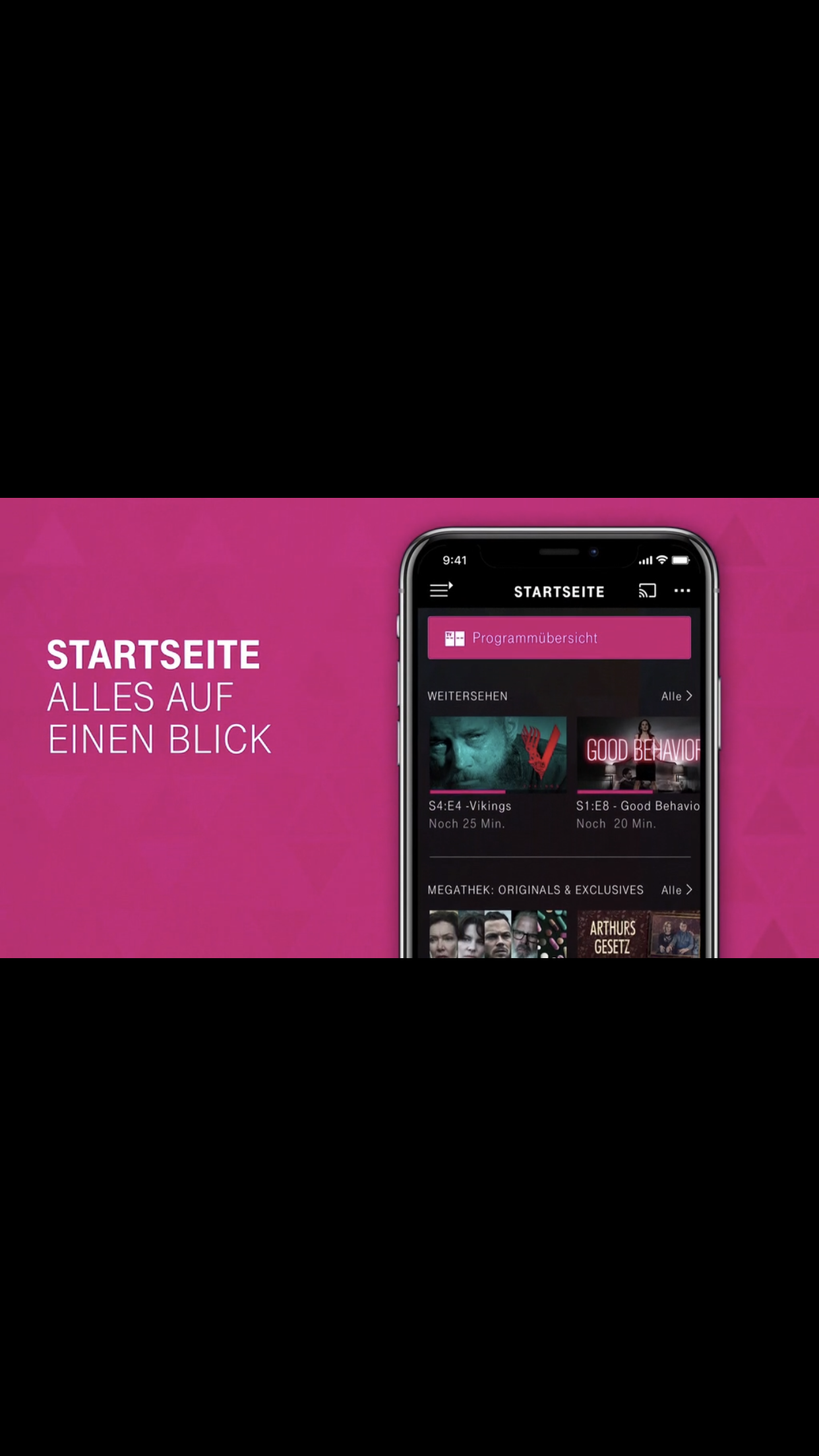 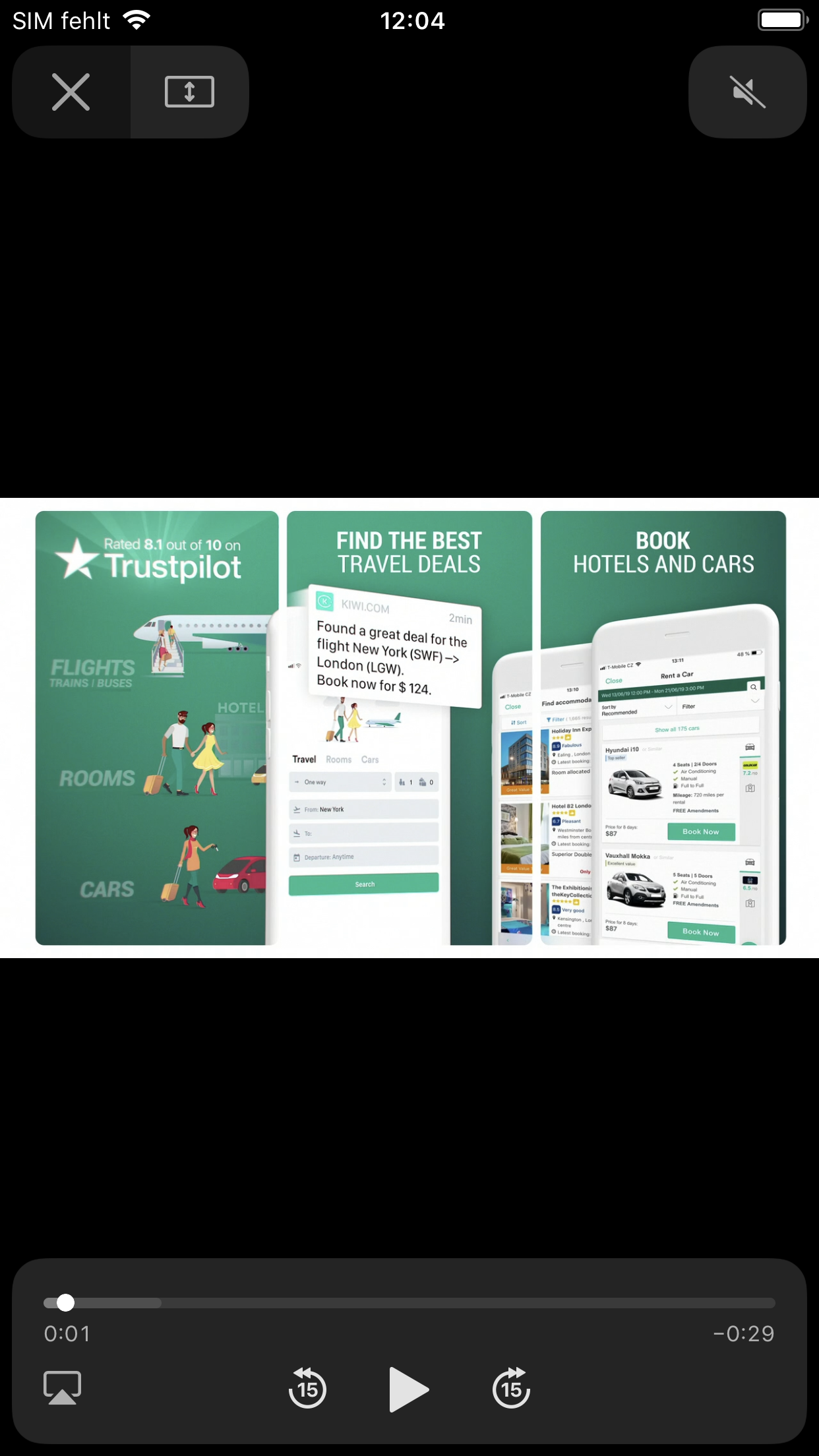 Whereas on the Apple App Store the orientation of the preview video can vary, on Google Play it has always been a landscape YouTube video. Since fall 2018, YouTube now properly displays portrait videos on Android in 4:3 format catching up with Instagram and Snapchat, as reported by magazines such as Mashable.

Portrait mode on YouTube was long troubled with two thick black bars on each side of the video. If the App Store is ready to waive some of its strict rules on video, will Google follow suit and allow vertical promotional app videos soon?

August 2018 saw the introduction of game demos for users with a new “try now” button. The technology of a third party mobile provider (AppOnboard) is powering these new demos integrated into Google Instant Apps, a service for gamer publishers that was already introduced in early 2018 by Google. Game demos can be up to 10 MB in size giving players a real sense of what the game is like. 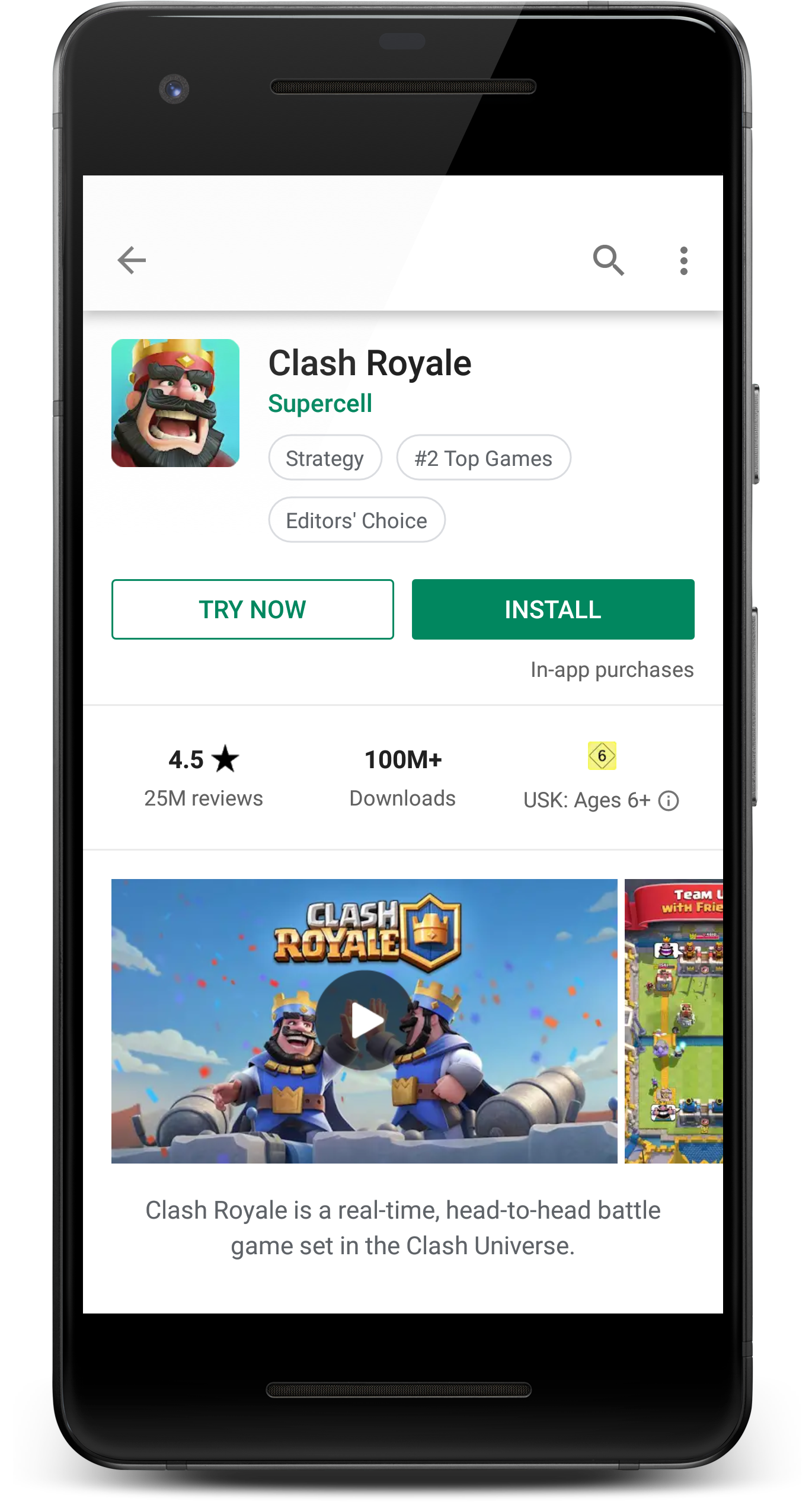 The “try now” feature makes an impactful addition to game developer’s marketing routine on Google Play, allowing them to

It remains to be seen what the real success in terms of growth and retention is. Cookie Jam Blast’s vice president of publishing, Vanessa Rouhani, attributes success of retaining users to game demos saying “We also found that Cookie Jam Blast Instant viewers outperformed organic installs by over +29–32 percent across day 1 to 7 retention.”  (see cnn.com article). According to AppOnBoard, demos for game developers increase retention up to 32%. But certainly we should treat these numbers with caution.

This is so exciting because it opens up new opportunities for ASO. Especially for global companies with local brands that have the same app in multiple countries. The Play Store is a saturated market, and in order to compete, you need the ability to optimize your app listing and direct user appeal.

Right on time for this year’s Google Developer Conference in May, the Play Console got an overhaul of several features. Worth mentioning is the enhanced competitive edge with peer group benchmarks as you can see in the screenshot. App developers can compare their mobile app’s size as well as the app’s ranking against competitors. Introducing these benchmarks reflects Google’s endeavors to increase performance and quality of apps. 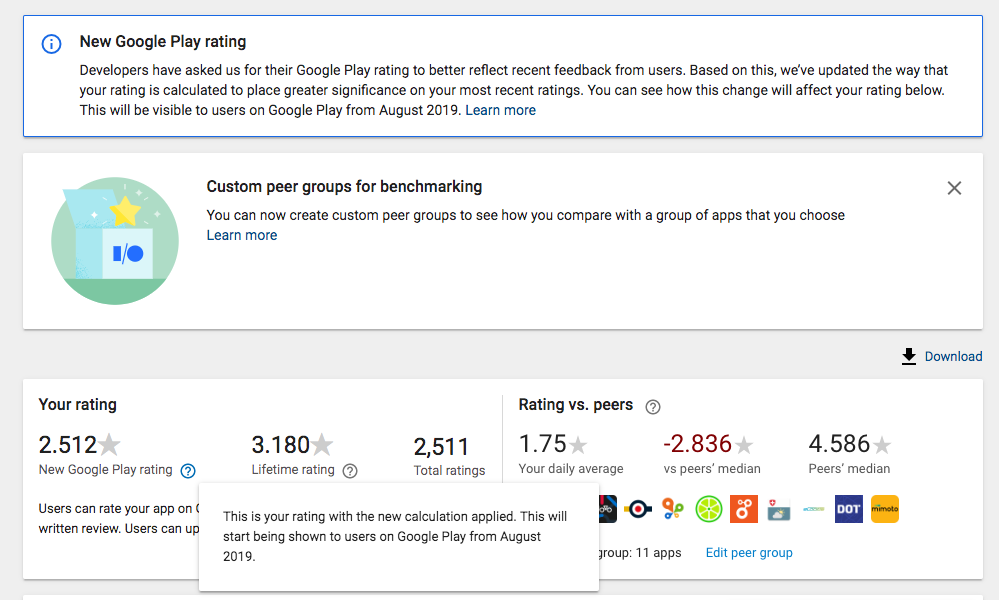 As of summer 2019, there will also be a new average rating calculation based on recent reviews. Platforms such as Tech Radar reported on it, revealing “instead of giving developers the choice of when ratings will reset, it will begin to weight app ratings to favor those from more recent releases”. According to Google, the app ranking calculation is based on “a combination of ratings, reviews, downloads, and other factors”. How exactly the new rating calculation will influence the ranking algorithm has yet to be seen. Ratings are part of Android app’s Play store SEO, hence app marketing managers should pay attention to the rating update.

“One of the things every developer wants to know is how people discover their app or game,“ says Tom Grinsted, product manager for Google Play. Since August 2018, the updated Google Play console shows a breakdown between “search” and “explore” under the organic channel. This feature breaks down how visitors arrive at the store listing either by searching (including keywords) or exploring (actions that aren’t search). 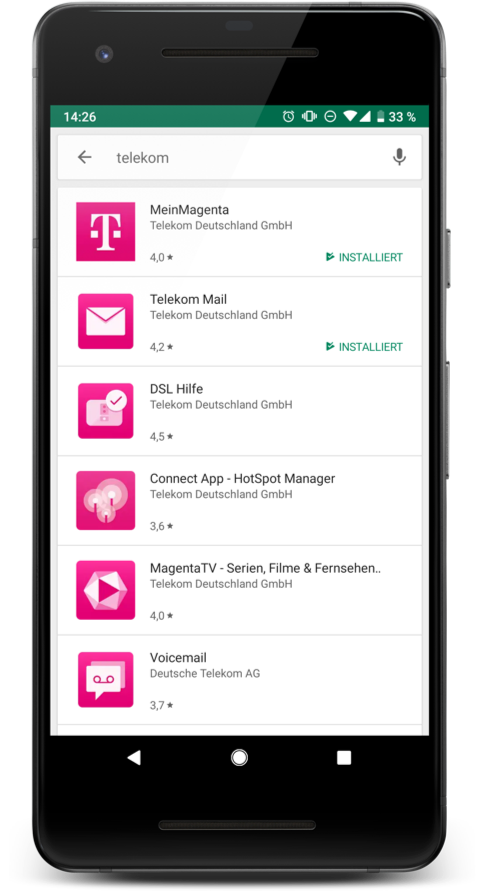 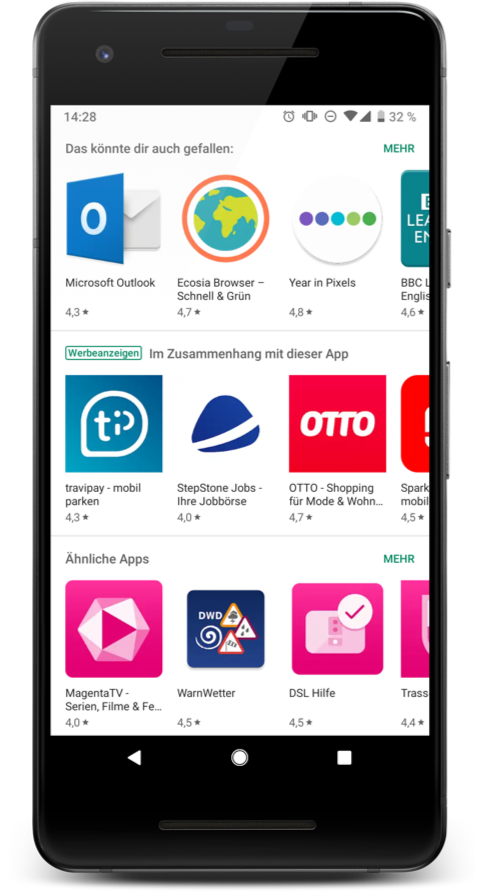 Making informed decisions on your ASO strategy and validating your existing traffic blend certainly has an echo effect for marketers well into 2019 and beyond. For our clients, it has been a valuable way to assess whether they target keywords that actually show up in the list.

When we made app publisher clients such as Deutsche Telekom aware of this feature, they immediately noticed that investigating under “other keywords” is worthwhile. Remaining keywords are bundled under the other keywords tab. Yet they are as relevant as those appearing in the list!

A selection of operating system updates in 2019

App marketers understand that they should dedicate enough time and resources on keeping track of the many changes that occur throughout the year on Google Play and the Apple App Store. We hope you’re excited for a new year in app marketing and feel on top of the ever-changing landscape of mobile engagement and retention.

Linda is a Communications & Content Manager at Customlytics, an app marketing, analytics and technology consultancy in Berlin. She strives to produce engaging content with the input of mobile experts at Customlytics. Previously, Linda held roles at communication consultancies and managed various industry award programs in digital communications and marketing. You can find Linda on LinkedIn.

Want to find out more about taking your app marketing up a notch, retention trends, data & analytics and much more? Drop us a note at info@customlytics.com, follow us on LinkedIn and join the Mobile Education Day or the Berlin Mobile Marketing & Growth Meetup.