Play-to-earn might sound like just another mobile gaming buzzword but it’s one of the most effective retention strategies — so let’s take a closer look. At GAMEE we have been tweaking our play-to-earn model for the past 18 months and not only has it worked well in traditional settings, but it is outperforming our other business models. We are currently working on a new product that will expand further upon this concept and take it to a whole new level.

GAMEE started back in 2015 with a simple idea — connecting mobile game players within one platform and using its social element and gamification to spark competition. We got traction in 2016 and 2017 when we also became one of the launch partners of Facebook Instant Games. In 2019, we started the pivot toward a play-to-earn business model, and in early 2020 we were acquired by Animoca Brands, a company with, among other things, a strong vision for the potential of play-to-earn.

Today, GAMEE has over 25 million registered users, 50 million monthly gameplays, and more than 4 billion cumulative gameplay sessions. On average, each user plays for 25 minutes a day. In that time, we have produced over 120 hyper-casual games of various genres and also developed games in collaboration with internationally famous brands including NASA, Guinness World Records, Manchester City Football Club, and Atari.

Last year, we introduced the first play-to-earn experiment on the current free-to-play GAMEE experience, in which we share part of our revenue with gamers as rewards. The main reason was to provide more value to our users — you could always play our games for free, but now you also have a chance to earn and win real-life prizes as a byproduct of playing games on your phone.

We moved away from the social and competition models for various reasons. Here are just a few examples:

We had to pivot and when planning the next steps, we really liked the idea of giving part of the revenue back to users. And so did our players. In fact, they liked it better than freemium models, iAPs, and memberships — all of which we tried at one point or another but none of which provided the traction we needed. 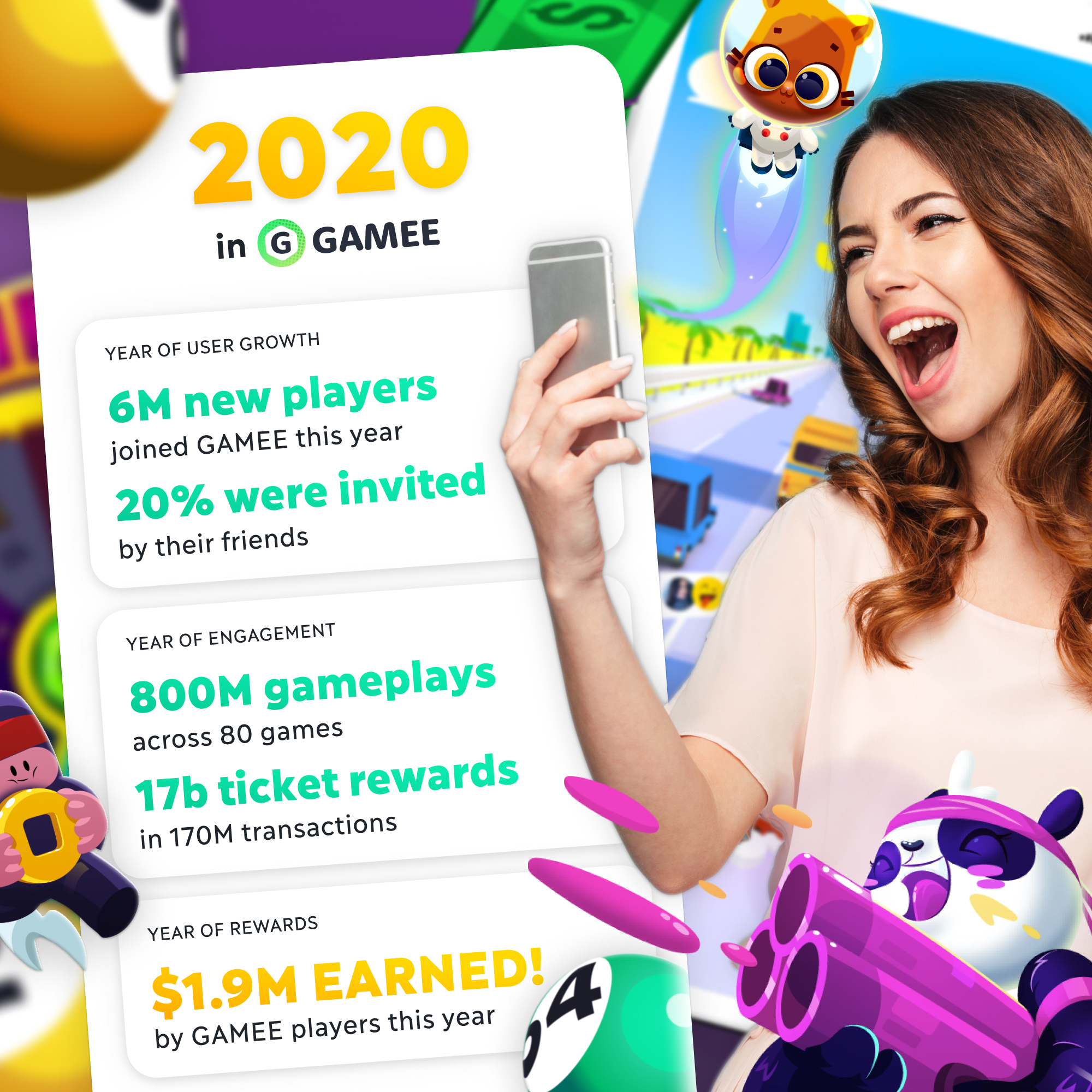 Today, players on GAMEE get “tickets” for playing — the better you play the more tickets you earn. Jackpot winners are drawn from all the tickets collected in a certain period of time — more tickets increase your chances, but even with one single ticket you can win. It is not only jackpots, though — people who play the most are rewarded for placing in the daily leaderboards, and people who play the best are rewarded with cash directly if they place high in tournaments.

What did we learn?

Play-to-earn has a unique value proposition, especially when combined with the free-to-play model — players don’t pay you and you reward them for playing. The popularity of this model allowed our team to double down on the ad-based experience, creating more engagement and simplifying the platform without sacrificing revenue. We don’t need to worry about selling premium items and memberships. Now it all comes down to engagement and playing games.

Our model is simple — we let you play games, show you ads, and then give part of the revenue back to you in the form of cash payment through PayPal. Yes, there is some luck involved, but at the end of the day even if you don’t win, you still had fun playing cool games and it didn’t cost you anything.

Here are some key points we have learned so far:

Trust is hard-earned and easy to lose. When stores are filled with apps using questionable practices, it is not easy to convince people that you are the real deal. Being transparent and working closely with the community has worked well, especially if winners are willing to share proof of their prizes. Community managers and good customer support are essential.

A short feedback loop is necessary (40-60 seconds worked best in our case). Anything too short leads to potential frustration and annoyance (and thus quitting), anything too long does not provide enough natural ad placements. With play-to-earn, you want to maximize the engagement and thus natural moments for advertising (between gameplays, level-ups, draws, and results).

Don’t forget micro-influencers. They don’t necessarily have a big following, but they can bring their friends, and those friends can bring theirs. Strong referral incentives can create a snowball effect.

Play-to-earn presents a nice alternative to traditional models, especially when paired with free-to-play.

Taking it one step further

As the transformation progressed and we saw the new model gaining traction, we started thinking about the next steps. We are working on bringing the play-to-earn model to the next level using the principle of true digital ownership. We are working to leverage the power of blockchain technology to ensure that your GAMEE digital items really belong to you and can also exist across various platforms and ecosystems.

So what does it really mean? 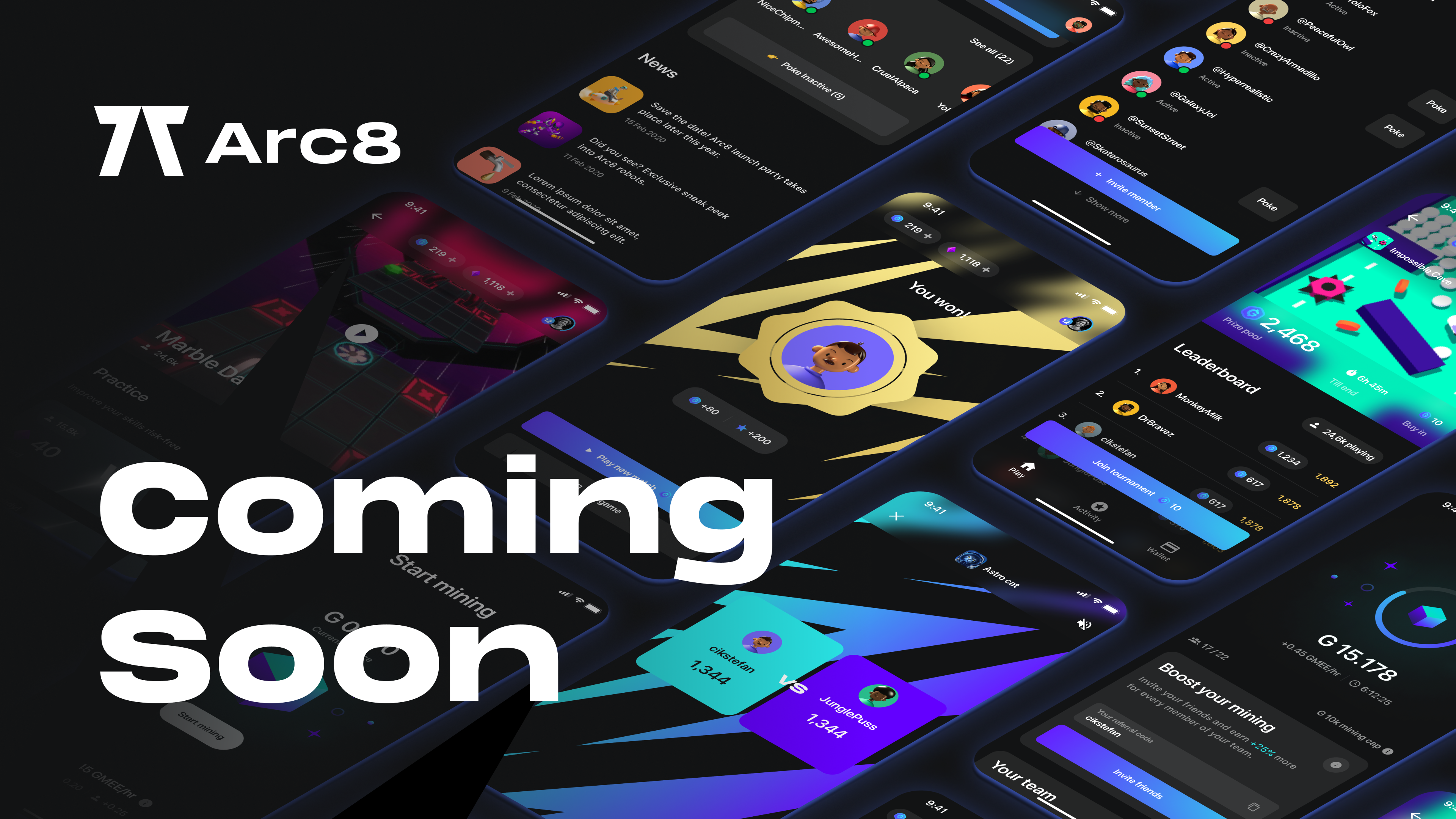 We are developing a new platform called Arc8 by GAMEE, which will work as a hub for hypercasual esports where people can compete one-on-one or in tournaments across a plethora of games. All the games are strictly skill-based, with no luck involved. The platform will use its own token, GMEE, for its economy. Non-fungible tokens (NFTs) will be integrated into Arc8 in the form of G-Bots, which are GAMEE platform upgradeable characters that confer various bonuses and abilities. We aim to reveal more about Arc8 by Q3 2021. At that point, players will be rewarded for their skill in games of various genres and for competing in tournaments. The G-Bots will allow their owners to upgrade them, use them across games, and earn extra rewards automatically within Arc8 platform. It will be a bold step forward in the burgeoning field of play-to-earn and we are excited to offer it to all our players.

Martin Žákovec is Head of Games at GAMEE. Over the past five years at GAMEE, he’s had the chance to work on games not only for the GAMEE platform but also for Facebook Instant Games, WeChat, OK, VK, and more. He works on our original concepts, tests new ideas on a daily basis, and, most importantly, creates games he enjoys.